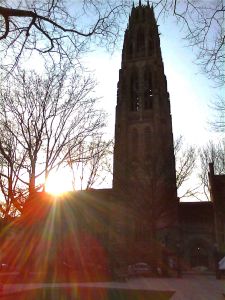 From April 14 through April 17, 2011, I had the honor and pleasure of presenting at the 17th Annual Conference for the Association for Core Texts and Courses, sponsored by Yale University, and co-sponsored by Augustana College, Boston College, and College of the Holy Cross, hosted at The Omni Hotel in New Haven, Connecticut. This year’s theme was “The Quest for Excellence: Liberal Arts and Core Texts.”

One of the plenary speakers argued for the spirituality of 19th century French poetry focusing on a particular piece by Mallarme, and two scientists, a quantum physicist and a chemist, responded with genuine enthusiasm about the connections they’d made to the poem presented and how the poem demonstrated the fragmentation in quantum physics and solvation of chemistry. The engagement from the scientists was wonderfully inspiring, and I truly hope to see more reaching out across the disciplines.

Thankfully the last speaker for the plenary sessions called for more cross-disciplinary collaboration and criticized the institutions for making such collaborations impossible. ACTC focuses more on critical and scholarly work though some of the panels centered on best practices and pedagogy. The panel “Core Images, Part II: Learning, Examples, Practice” brought together art historians and art professors who urged the use of art as a vital source for discussion and inquiry. Tatiana Klacsman from Augusta State University and her presentation “The Iliad in Teaching Art History within a Humanities Framework” covered how culture and values can be analyzed and evaluated through Greek artifacts. Mona Holmlund from University of Saskatchewan discussed approaches to indigenous art, especially in contrast to the Western canon with her presentation “The Challenges of Integrating Indigenous Knowledge with the Western Canon.”

Another literature scholar posed the worry of art replacing the written word, and an attendee followed up by asking how much time should faculty dedicate to art versus text. I had to counter that time is a measure of value, and everything discussed on that panel came down to values whether we’re comparing Indigenous art to Western or text versus image. As Socrates lamented the rise of the written word claiming that text would corrupt the rich oral culture of his time, everything comes down to values, which is determined by culture. We need to keep this in mind anytime we weigh one thing against another. As scholars we should constantly be checking our values and be wary of how our values factor into our curriculum, especially considering how those values may be servicing our goals for diverse student populations.

My own paper certainly evolved out of this consideration of values, which I presented for the panel “Contemplating Critique: How Far Back in Time is It Used?” Here’s an excerpt:

Through his Discourse on Inequality, Rousseau draws in First-generation students through affective means, modeling an essential method of critique and analysis that demonstrates an individual’s agency of power based on reason, observation, and imagination. Rousseau provides a critical point of connection for students who may not be traditionally accustomed to the culture and privilege of higher education, and, through his narrative and argument, students can discover a means for engagement within their communities.

Nicole, we’ll call her, was a student who had yet to find her footing, academically. By simplest definition, she is a first-generation student. Neither of her parents had earned their undergraduate degree, and the college experience was all together uncharted waters for her and her family. She floated through Greek Thought and listlessly wandered through the likes of Dante, Augustine, and Chaucer in Roman/Christian, consistently feeling estranged by authors who looked and sounded nothing like her, describing cultures and concepts that seemed completely foreign, and irrelevant to her immediate experience.

By the time she came to my class as a sophomore, she had found her niche on campus and was part of a strong social network, but, academically, she was still unanchored and her displacement seriously affected her GPA. Still, Nicole was hungry for intellectual nourishment, knowing she lacked purpose in her studies, which inhibited her from realizing her full potential. By mid-semester, she was barely treading the choppy waters of Cervantes, Hobbes, and Locke, until, suddenly, to both her surprise and my own, Nicole reached terra firma with Jean Jacques Rousseau.

More coverage and reflection post-conference is forth coming.

"Shyness is nice and shyness can stop you" Cancel reply

My Tweets
Join 874 other subscribers