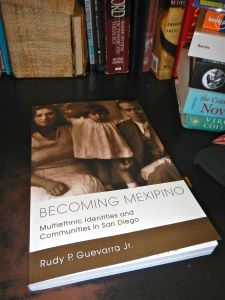 Just got my signed copy of Becoming Mexipino: Multiethnic Identities and Communities in San Diego written by Dr. Rudy P Guevarra Jr. (Arizona State University) and published by Rutgers University Press. I remember when Dr. Guevarra and I first met at a FANHS (Filipino American National Historical Society) conference in San Diego years ago. We compared notes about being Mexipino or Chicapina, as my family calls us, and, later at UCLA, I would share my stories with him officially for the honor and privilege of being included in his book.

Rashaan and other Mexipinos in San Diego are the bridges between both cultures because they live a multicultural existence. Multiethnic and multiracial people have already experienced an alternative worldview, which has positive implications. She described it in terms of the future of racial and ethnic mixing: ‘I think it is inevitable…Time magazine put up all the races of together to see what it [hypothetical person of the future] would look like, and it looked Filipino. You know, it’s like we’re already there, we’ve been there. We’re just bringing it to the forefront (158)

Becoming Mexipino is a social-historical interpretation of two ethnic groups, one Mexican, the other Filipino whose paths led both to San Diego, California. Using archival sources, oral histories, newspapers and personal collections and photographs, Rudy P. Guevarra Jr. traces the earliest interactions of both groups with Spanish colonialism to illustrate how these historical ties and cultural bonds laid the foundation for what would become close interethnic relationships and communities in twentieth century San Diego as well as in other locales throughout California and the Pacific West Coast.

Educators, please consider using this text in your classroom. California history lovers, ethnic study researchers, and San Diego locals, why not pick up a copy for yourself? Please help spread the word to interested parties and consider having a go yourself!